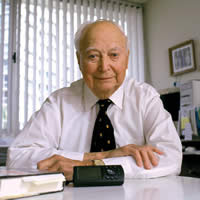 His ancestors came from Bytča, Slovakia. He was an outstanding technician, also called „the forgoten genius“ and the fater of GPS - a world famous navigation system caried by many of us in cars or pockets. Ivan A. Getting also improved radar which helped to save London from bombing during World War II.

Members and friends of Amateur Radio Club Station "Manin" would like to commemorate him in this way.

For more information about Ivan A. Getting see: